On September 11th.  I was in Washington DC when it happened, my husband working for the Department of the Army, and I thought he was in the Pentagon that morning when it happened, so it brings about very emotional feelings on the day for me.....

However, as the day once again approaches us, 14 years later, it feeling like it was yesterday.....I look at my son who is graduating this year and I still see that three year old little boy I was blissfully playing with outside in our back yard that beautiful late summer morning, unaware our world had changed forever.

Ignorance is truly bliss...and I had never gotten the meaning of that expression fully until that day.

So today a friend mentioned to me the memorial that stands in on the shore of Bayonne, New Jersey, a gift from a Russian sculptor and the people of Russia themselves to those who perished in the attack on the World Trade Center and about the first attack back in February of 1993....when I had been living in New Jersey, my middle daughter only a month old.

I'd never even knew it existed? Did you?  It was dedicated on September 11th, 2006, I mean was ALIVE and watched the news that morning and I did not see one single thing about it.  Former President Clinton dedicated it....but I don't remember anything about it....I wonder why that was....maybe I just missed it or maybe it was just so small that it was not covered nationally....

Anyway.....see, I'd been to Bayonne many times, I had a very close friend of mine from when were at our first duty stations and she and her husband were were now stationed there when it was an Army installation....and I living about an hour or so away at the time made it very easy for us to visit.....Bayonne, NJ was a small place, but the people I met at the Post very welcoming....it was my first experience into stairwell Army housing too and I thought to myself, that it was rather quaint, but then she was a remarkable woman and I miss her very much.

I remember one late afternoon walking with her and our children and stopping to look over at New York and looking at the World Trade Center as it stood so majestically unshaken earlier that year after the first attempt to blow it up in 1993....and now as we stood in the cold air blowing off the bay, the sun setting and the beautiful sky providing a colorful backdrop, they towered above a city descending into evening darkness....and I thought to myself, what an unshakable Nation we are so very blessed to be living in, even terror can't knock this house down....how wrong I'd be proven.

It's all memories now, every trip I took to New York in my life, every drive past the World Trade Center....but I will never forget that afternoon standing there with my friend and our children, who are all grown up now and watching the sun go down with it's last reflecting rays trying to find a surface to shine off of.....in those beautiful, magnificent.....lost towers of our past.....


To the Struggle Against World Terrorism: A History 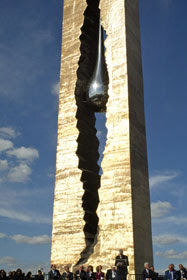 The artist, Zurab Tsereteli, was in his home in Moscow on the morning of September 11th. The television was on as he was getting ready for work and Zurab, like the rest of the world, was glued to coverage of the attacks on the Twin Towers. He watched the towers collapse on TV and was moved to tears.

That day, he went to work at the Academy of Art driving on a route that takes him past the American Embassy. People were gathered outside the embassy gates to pay sympathies, to be together, and to mourn. He saw a mass of crying people and decided to use the image of a tear in a memorial.

He set to work that day on a proper and appropriate form through which to express his feelings over the attack. He went through many various sketches and 'forms' (all of which are chronicled in the yellow book) until finally deciding on the current monument's form.

Zurab traveled to NY shortly after the September 11th and went to ground zero. The ruins were still steaming. He decided that he wanted to create a memorial to the victims; but that wouldn't want to build on top of the bones of the dead on the ground zero site. He began to look for an appropriate and fitting site on which to erect the memorial.

Zurab spoke with friends and colleagues who were in NY during the attacks. He heard stories about how boats and ferries were used to shuttle survivors away from the Twin Towers. He also learned about the New Jersey residents who worked in the towers. Zurab decided to look for a site in New Jersey, where the monument could be on the waterfront and settled on a never before seen area of the peninsula at Bayonne. Here, the World Trade Center was the backdrop to the waterfront, and so, the backdrop of life. The site had been a military instillation, and the town had decided to convert the land into public park-space. 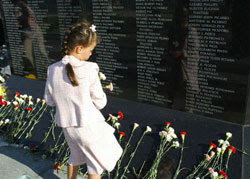 From this vantage point, the Twin Towers looked almost as if they were in fact one building. His bronze monument reflects that image with a jagged tear through the center, and a 4-ton nickel tear hanging from the top. The tear represents not only the sadness and grief over the loss of life on 9/11 and previous attacks on the World Trade Center, but also hope for a future free from terror.


The monument has several reflective elements, so that the visitor becomes part of the memorial. The nickel tear is shiny and mirror like. The granite name plates which make up the stand for the monument, and on which the names of the victims of all who perished on September 11th are etched, is also shiny and reflective.

This is the "TEAR DROP" made and installed by the Russians to honor those who died in and a statement against terrorism.  The tear drop is lined up with the Statue of Liberty. 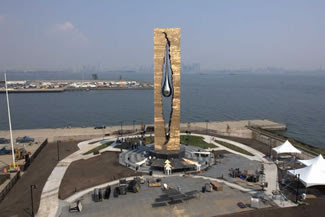 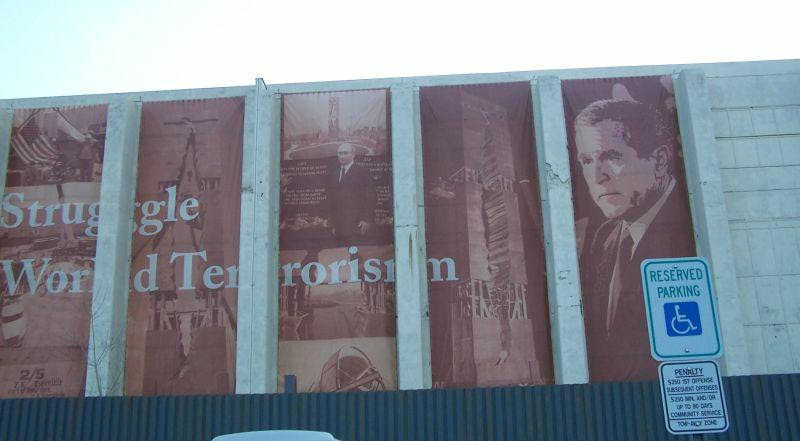 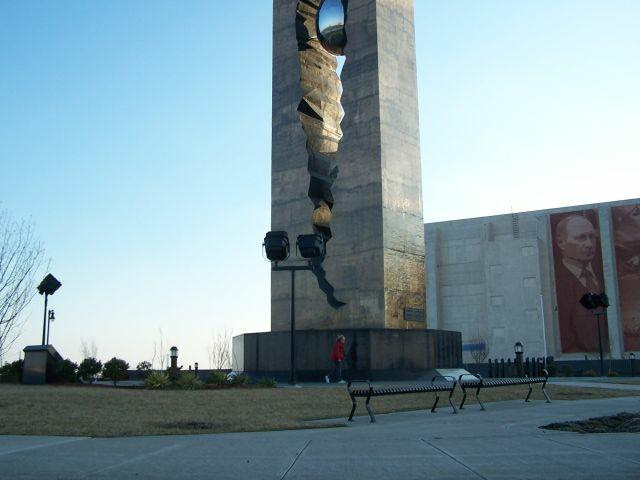 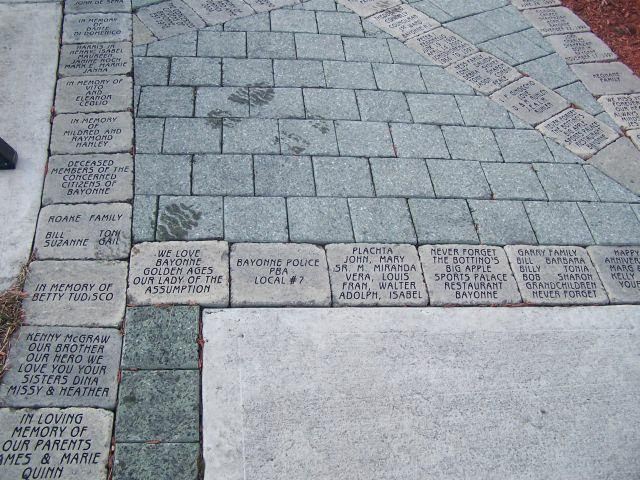 The walkway is made of stones. 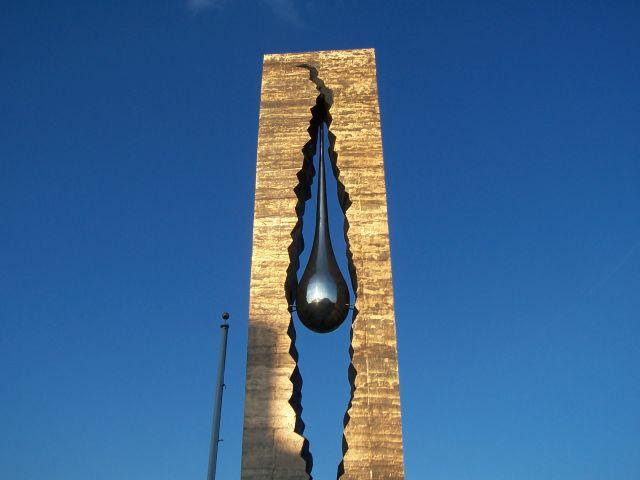 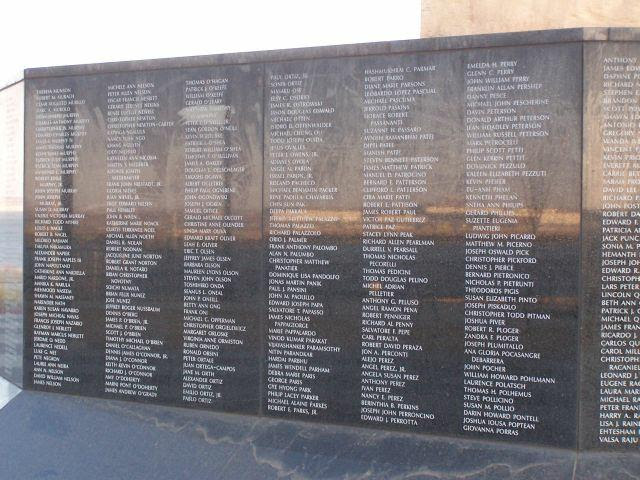 I'm editing this today, September 4th, after thinking of what I'd written and I hope after reading the entry, you go a little further.

As I stated we lived in the DC area at the time and had many friends who worked at the Pentagon and knew those lost when they crashed that plane into our beautiful headquarters. The 9/11 Pentagon Memorial there is beautiful and walking through the benches that are placed delicately on the Earth and the way the names are placed of those lost on board as plane approached the Pentagon and the situation of the names of those who perished within the walls of the great building is quite a site to behold, and should you ever find yourself in Washington, make the trip to see it.

I have never seen the Flight 93 Memorial in Shanksville, PA, but I've seen the video of it and is so very moving it brings me to tears, a sad reminder of what the passengers and crew members aboard flight 93 sacrificed in their actions that saved many other lives  as they thrwarted the attack on our Nation's capitol, sacrificing their own.